This solid pewter Mezuzah is inscribed with the traditional blessing for the Jewish home in Hebrew.

About the product options:

If you choose "No Scroll", we'll ship you the Mezuzah with no scroll inside. Choose this if you already have a scroll.

If you need a scroll as well, choose "Add a Kosher Scroll". We'll ship your Mezuzah with a 4" Basic Kosher scroll already rolled and inserted inside the Mezuzah.

Mezuzahs bring blessing to your home. According to Jewish tradition, they should be on almost every door of your home. Besides the front door, Mezuzahs also go on the back door, bedroom doors and many other doors of your home.

I'm a real estate agent and I recently order the house blessings Mezuzah for part of my clients closing gift. It was beautiful and it arrived in plenty of time for the closing. I was very pleased with communication and how they kept me informed on the status of my order all the way to delivery.

We love our Mezuzah! Thank you for providing unique and quality products along with excellent customer service. G-d bless you. 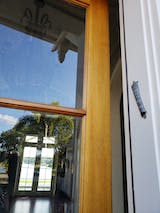 I think it is the best looking one among the four I bought this time.

The price is fare, the shipping updates were great, the overall service was very good. I will be a return customer. Quite satisfied.

My Mezuzah is wonderful. Thank you.

J
J.F.
Cost too much to ship

Nice mezuzah, but boy, between the tax and the shipping cost, somehow the mezuzah we bought, which according to this email has just been reduced by $4.00, went from a cost of $39.99 to, with tax and shipping, more than $50.00. It was just a dull surprise. It also would have been nice if there had been a scroll inside--not a special, handwritten by a rabbi scroll, but even a simple scroll with printed text. It seems like there should have been an option for such a version--not the special, expensive scroll, but just a little scroll, no big deal but more than an empty mezuzah.