The Torah is compared to a tree of life and this beautiful Mezuzah reflects this symbolism. The Tree of Life Mezuzah is made of pewter.

If you choose "No Scroll", we'll ship you the Mezuzah with no scroll inside. Choose this option if you already have a scroll.

If you need a scroll as well, choose "Add a Basic Kosher Scroll". We'll ship your Mezuzah with a scroll already rolled and inserted inside the Mezuzah.

Get Mezuzahs for Your Entire Home!

Mezuzahs bring blessing to your home. According to Jewish tradition, they should be on almost every door of your home. Besides the front door, Mezuzahs also go on the back door, bedroom doors and many other doors of your hom 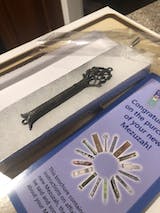 Communication from start to end of delivery was excellent. One complaint that another customer noted also is the item I selected is silver but when received was black. See photo. I’m not one to try and clean it so was disappointed the item did not arrived as advertised. 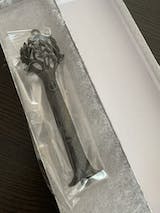 We received the tree of life mezuzah and was very surprised when we opened the package. Instead of a pewter color object with nice etching we received one that was almost black and were unable to make out any detail. Needless to say we were disappointed. Tried calling customer service and the memory on the answering machine was full. We decided to clean it with brasso and thankfully after a good bit of cleaning and rubbing it looked somewhat like the picture on the web. Hopefully it will not tarnish very quickly.

B
Barbara Levine (Mahomet, US)
Tree of Life Mezuzah

Very pleased with my new mezuzah. It came promptly and well packaged and in a pretty gold gift box. I was contacted at all stages of ordering and shipping and receiving. Your company has great customer service. 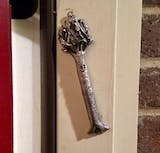 My beautiful mezuzah--with a kosher scroll--arrived just before Shavuot. Very pleased with the quality and customer service. 5 stars!! Thank you so much!! 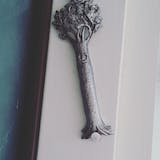 It looked silver on the website, but the actual product is black.

Received this yesterday and love it. It is darker than I expected it to be, not a bright silver but I'm fine with that since its for the outside door. Love the detail. Only thing is the double sided tape was already on it and I think the scroll I ordered is inside. I had to rip off part of the tape to make sure the scroll was in there. I assumed the items would have been separate for me to put togther. I would have liked to have seen the scroll. This mezuzah has screws also so no need for the tape.